Sometime after mother's death in 1888 he and sister Mary Ann were placed in the Union Workhouse, Chester-le-Street. I've looked through the four pages of entries for the Union Workhouse in the 1891 census, and William and his sister are not there.

1895: Seems to have been taken out of the workhouse, together with his sister, to be cared for by an aunt (see sister Mary Ann for details).

1901 census: Age 16. Place of birth is Edmondsley, Co. Durham. Living as a boarder with his uncle William Clark's family in Daisy Hill. Occupation is given as 'Putter - Coal Mine'.

Margaret Cozens: 'The story goes, as Grandma Coe told me, that he ran away from William Clark. Seemingly he packed a trunk and lowered it out of his bedroom window. He was mistreated by William Clark [...] by this man using a whip to him. [...] This next information was given to me by our cousin Audrey Coe (her father was your Grandfather Adam's brother, William Sleightholme Coe). William took to the roads to look for work and he worked his way up to the Scottish Borders doing any jobs that he could find. One job was working on a farm and seemingly he was treated very well. This must have impressed him, as when he married [...] he had what you call a Tramps' Cross made for his door so that if anyone [came] travelling looking for work, like he had done, he and Grandma Coe gave them the same treatment—food and shelter for the night. They did actually take in one tramp that I was told about by Grandma; we took in a man for the night, and this man had a wooden leg, and the children had not seen anything like this before. When it came to bed time, Grandad and Grandma had a bed in the parlour as the children slept in the two bedrooms upstairs. The tramp was given the sofa in the living room for the night. When Grandma and Grandad went to bed, Grandma was nervous about a stranger in her home so she put a piece of string on the door handle and then on to her big toe, so if he came into the parlour she would know. When the children went to bed the children decided that they would go down and steal the man's wooden leg, which they did do. Now this house did not have a proper staircase [...] just a step ladder, so this was pulled up so that the man could not climb up to them. Next morning Grandma heard moving about in the living room cum kitchen. When she came into the room, the man had the fire going, kettle boiling, and he had used the sweeping brush as a crutch. The man had taken it all in good humour, but the children did get told off for taking his wooden leg.'

1909: Occupation is given in son Adam's birth certificate as Coal Miner.

1911 census: living with wife and children at Red Rows, Edmondsley. He is working as a coal miner (hewer), aged 26 and born in Edmondsley.

Margaret Cozens: 'Served with Durham Light Infantry in the First World War. He was a hospital orderly. Also in one photograph I have of him in uniform he is holding a cane with what looks to have a brass or silver handle. I was told he was a Batsman. William was invalided out of the army with pneumonia. What happened after this I do not know, [whether] he went back in, or if that was the end of his army career.'

Margaret Cozens: 'William worked at Sacriston colliery. There is information that he and your grandfather were sacked from the colliery because of being related to Alderman Thomas Holmes, who was working towards better rights for miners. So because of [this] William became a Midden Man (which was to empty human waste from the inside of the ash toilets). [...] Also Grandad Coe used to drive a 4-horse drawn vehicle which was driven to Birtley Convent then back to Ushaw College where the Catholic priests trainedÃ¯Â¿Â½the college is still there today.

Date of death from Margaret Cozens, who says cause of death was carcinoma of the stomach, and that death was registered by his son Adam. He died at 2 Hunters Terrace, Edmondsley. 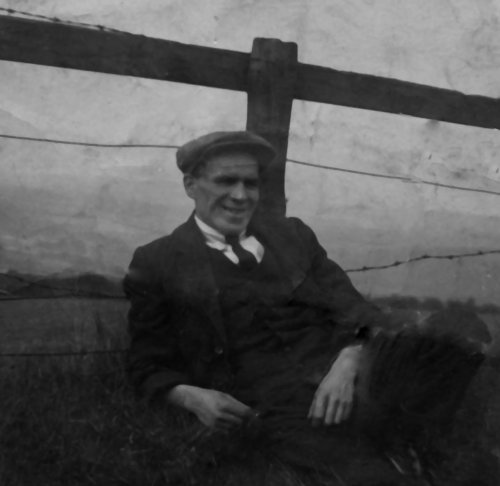